Drive Toward a Cure and Taste of Motorsports Join Together 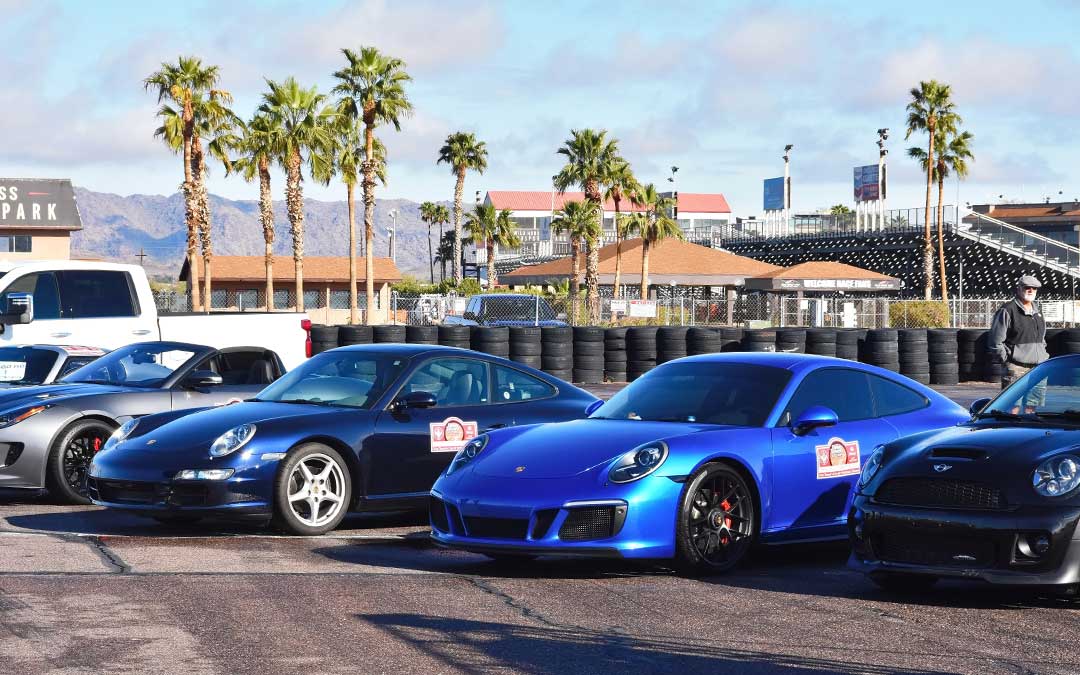 Chandler, AZ – March 23, 2021 – When premier lifestyle automotive event Taste of Motorsports enlisted Drive Toward a Cure as its key beneficiary for the 2021 season, the only caveat from the charity foundation was that all funds raised stayed local, supporting regional Centers of Excellence for Parkinson’s Disease.  Having just completed the first of three events together earlier this month in Arizona, including two separate fundraising endeavors, Drive Toward a Cure provided a matching donation that secured a $12,000 gift to the Muhammad Ali Parkinson Center at Barrow Neurological Institute in Phoenix to support patient care. 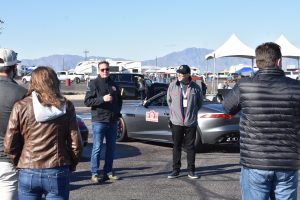 Drive Toward a Cure Board Member Derek Torry (center left), and Tom Floyd (center right), head of Taste of Motorsports, kick-off the charity drive supporting Parkinson’s Disease and benefitting the Muhammad Ali Parkinson Center at Barrow Neurological Institute in Phoenix, AZ. The luxury automotive lifestyle weekend included two separate fundraising endeavors and a matching donation from non-profit Drive Toward a Cure that provided a $12,000 gift to the local Arizona Parkinson Center of Excellence. 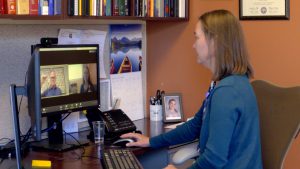 Philanthropic endeavors allowed Holly Shill, MD, FAAN, Director of the Muhammad Ali Parkinson Center at Barrow Neurological Institute and the Bob & Renee Parsons Chair, to lead her facility in providing virtual support groups, art classes and music and movement therapy for Parkinson’s patients in both English and Spanish during the hardships of Covid-19. 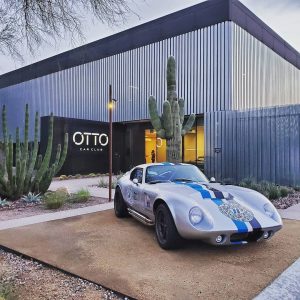 Luxury automotive lifestyle brand Taste of Motorsports hosted its VIP preview evening at the Otto Car Club in Scottsdale with an auction fundraiser for national non-profit Drive Toward a Cure, supporting Parkinson’s Disease. The weekend’s charitable proceeds included a spirited scenic drive and together with the auction benefited the Muhammad Ali Parkinson Center at Barrow Neurological Institute in Phoenix, AZ. Hagerty’s DriveShare (with ‘Dream Drive’ Factory Five Cobra on display) was both a sponsor and a participant throughout the weekend of events, concluding at the Bondurant High Performance Driving School. 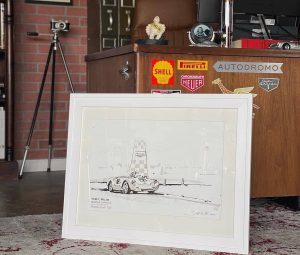 Automotive artist Dwight Knowlton of Carpe Gear/Carpe Viam donated a 1-of-1 framed sketch of legendary Porsche-phile Vasek Polak and his infamous #88 Porsche 550 Spyder during the Taste of Motorsports VIP preview evening for the weekend of lifestyle automotive events at the Otto Car Club in Scottsdale, AZ. The artwork contributed to a $12,000 gift raised together by Taste of Motorsports and Drive Toward a Cure for the Muhammad Ali Parkinson Center at Barrow Neurological Institute.

According to Deb Pollack, founder of Drive Toward a Cure, while her foundation has expanded to create a national focus, it was incredibly important to retain a local aspect of giving for each event.

“Over the past 18 months we have grown our ‘Access to Care’ fund from one overall donation to individual opportunities supporting patient care.  We prefer to offer a greater connection within the community for those that are challenged,” said Pollack.

“Providing funds for stronger grassroots approaches can include anything from bringing patients virtual nutritional education and exercise programs, to creating touchpoints of hope for a meaningful purpose.  Most important, we are helping individuals and providing areas of ‘inclusivity’ and involvement.”

Drive Toward a Cure Board Member Derek Torry, who happens to also be inflicted with early on-set Parkinson’s, was on hand for the entire Arizona weekend, having driven in from Southern California.

Fundraising events included an initial spirited, yet socially distanced, drive on Saturday morning and a VIP charity/auction preview evening at the Otto Car Club in Scottsdale.  The highlight of the weekend was Sunday’s Taste of Motorsports finale at the Bondurant High Performance Driving School.  Attendees had the opportunity within a festival atmosphere to test drive high-performance vehicles on track, view an enormous display of exotic cars including the newly launched Shelby Speedster, and to enjoy a full array of gourmet food all day long.

Torry noted that the commonality of attendees, whether drivers or car enthusiasts, were very much in sync with Drive Toward a Cure’s mantra of blending cars and camaraderie.  “Since 2016 we’ve set out with one mission – combine the minds and hearts of individuals within the car community with a stronger awareness for Parkinson’s disease – and find ways to channel their enthusiasm to raise funds.”  Drive Toward a Cure has successfully moved that mission to raise more than $500,000 since its inception five years ago.

“We are so grateful for the support from Drive Toward a Cure,” said Holly Shill, MD, FAAN, Director of the Muhammad Ali Parkinson Center at Barrow Neurological Institute and the Bob & Renee Parsons Chair. “Philanthropy allowed us to continue to serve our patients during COVID-19 by offering virtual support groups, art classes, and music and movement therapy to patients in both English and Spanish.”

Recognized as a Parkinson’s Foundation Center of Excellence, the Muhammad Ali Parkinson Center at Barrow Neurological Institute has led treatment and research for Parkinson’s disease and movement disorders since 1997. The Center’s team of neurologists, nurses, physical therapists, occupational therapists, and speech-language pathologists is dedicated to providing patients and their caregivers with the best clinical care, research, rehabilitation, education, and support. The Center also is a world leader in Deep Brain Stimulation (DBS) surgery for the treatment of movement disorders. Patients and families across the globe have found support through the Center’s wide range of educational workshops, support groups, and acclaimed Hispanic Outreach Program. Learn more at BarrowNeuro.org/Parkinsons