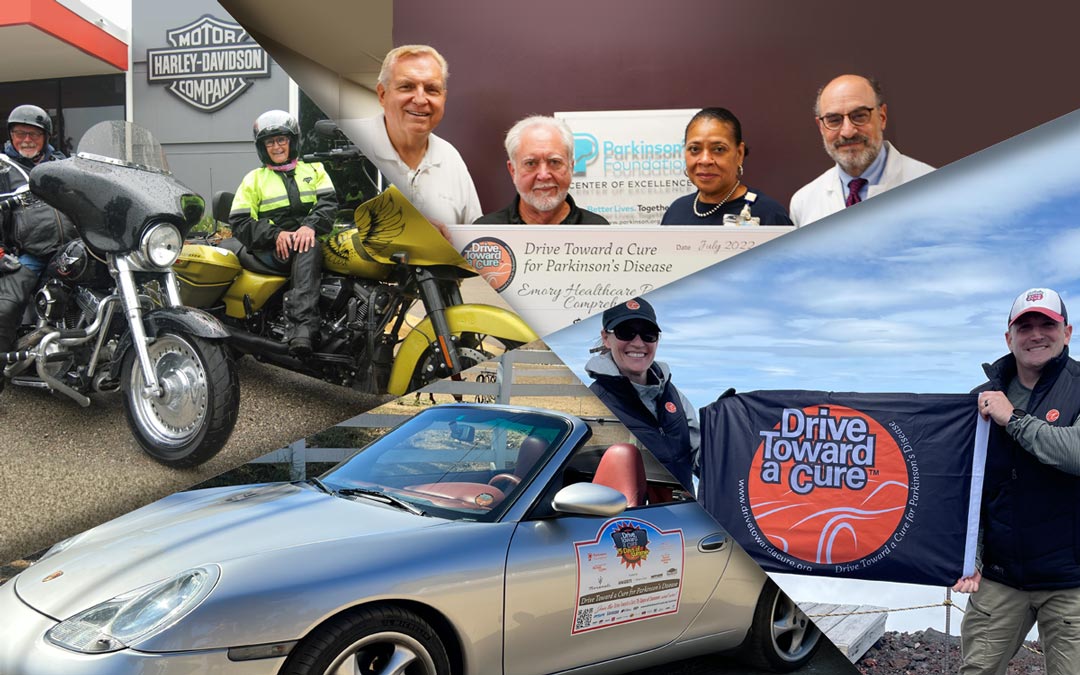 LOS ANGELES, CA – July 27, 2022 – With more than $1 million raised in donations for Parkinson’s Disease since Drive Toward a Cure® established its roots in 2016, the non-profit foundation has benefitted from “the village” it takes to grow awareness and seed fundraising success – and so far this summer, much success has been achieved through cross-country treks, car club drives nationwide and even a global shout-out for the foundation atop Japan’s famed Mount Fuji. 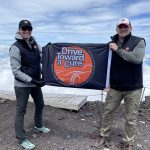 John and Wendy Cacioppo, originally Maryland residents and now living in Japan, proudly wave the Drive Toward a Cure® flag in support of Parkinson’s Disease awareness after climbing to the top of Mount Fuji, the country’s highest elevation. They are continuing to raise funds for the cause through their own webpage at www.drivetowardacure.org/fundraising/climbmountfuji . 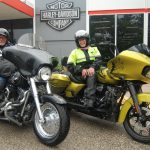 Idaho resident and 63-year-old mother/grandmother/financial advisor Joni Pursell and her traveling companion Mike Burke took their Harley-Davidson bikes on a 34-day, 8,600-mile journey across North America earlier this summer, while raising more than $15,000 for Drive Toward a Cure® and Parkinson’s Disease – her donation page remains open for continued contributions at www.drivetowardacure.org/joni . 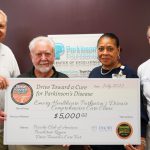 Following their own 1-day driving tour, Atlanta-based Porsche Club of America Peachstate Region made a generous donation to the Emory Healthcare Parkinson’s disease Comprehensive Care Clinic – a regional CENTER OF EXCELLENCE for the Parkinson’s Foundation – from left to right – Mike Thies and Sam Mosely led the tour and Tammjo Best and Dr. Stewart Factor are representatives of Emory. Continued donations can be made at www.drivetowardacure.org . 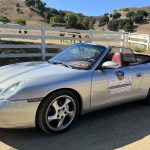 Individuals nationwide are participating in this year’s Drive Toward a Cure® 75 Days of Summer – raising funds for Parkinson’s and competing to win more than $15,000 worth of prizes including weekly random prize drawings. SIGN UP and DRIVE at www.drivetowardacure.org/summer – all cars are welcome.

According to Deb Pollack, founder of Drive Toward a Cure, while primary involvement throughout the automotive enthusiast and professional car communities has included support from manufacturers, clubs, and organizations, it’s the individuals that have made the most significant contributions in providing recognition for this challenging disease on a worldwide level.

“There’s a wonderful ‘why’ behind the challenges that our donors take on as they empathetically remind us that those challenged by Parkinson’s Disease on a daily basis have more difficulties than the average individual,” said Pollack. “This summer we had an adventurous 63-year-old grandmother ride her Harley-Davidson more than 8,600 miles across North America. Her 34-day trek began as a whim to eat lobster in Maine, but she ended up raising more than $15,000 along the way, while honoring her best friend in Illinois who revealed her own challenges having been recently diagnosed with the disease.”

Not only did Idaho-native Joni Pursell gain national attention with her ‘YRUW8NG’ (read ‘Why Are You Waiting”) cross country motorcycle ride by participating in magazine, podcast, and radio interviews – but the majority of the funds she raised are going back to her local community in support of both a Parkinson’s clinic in Boise and the Treasure Valley YMCA “Rock Steady Boxing” for Parkinson’s Disease. She joined with Drive Toward a Cure to further benefit those that need patient care, one of the Foundation’s cornerstone giving commitments.

Separately, John and Wendy Cacioppo took advantage of getting to know their current residence in Japan by hiking to the top of Mount Fuji and bringing global acclaim to Drive Toward a Cure by presenting a flag at its peak. Additionally after reaching the summit of the highest mountain in Japan, the Cacioppo’s chose to keep their adventure current with the creation of an ongoing fundraising page for Parkinson’s – which can be found at www.drivetowardacure.org/fundraising/climbmountfuji.

Drive Toward a Cure has been successfully growing its own following throughout the country, with car clubs and groups that take on one-day programs to benefit the cause. These funds also remain in local areas and have been supporting various regional Centers of Excellence in the United States for the Parkinson’s Foundation, including those in Atlanta, Boston, Denver, Houston, New York, Nashville, Phoenix, Portland, Raleigh, San Diego, and San Francisco. Facilities include world renowned Parkinson’s clinics at universities including Columbia, Baylor, Emory, UC San Francisco, Vanderbilt, and Duke.

Like the various car clubs across the nation creating their own one-day events on behalf of Drive Toward a Cure, the Porsche Club of America Peachstate Region in Atlanta recently contributed to funds raised for the Emory Healthcare Parkinson’s Disease Comprehensive Care Clinic, with a $5,000 donation raised on a singular “Drive Toward a Cure Tour,” with members enjoying a scenic drive, followed by lunch at the Savoy Automotive Museum.

Additional fundraising opportunities have included bar-b-ques, virtual programs and currently — for the third year in a row — Hagerty has fueled Drive Toward a Cure’s ’75 Days of Summer’ where individuals track the combination of their mileage and fundraising dollars to win prizes all summer long.

For 2022, between random weekly prize drawings and grand prizes which will be announced after Labor Day Weekend, more than $15,000 worth of prizes will be awarded from sponsors including Michelin, Hagerty, RSR Wheels, Grand Prix Original USA, BMW Performance Driving School, Skip Barber Racing School, Mothers Polish, Avants, Pennzoil, Taste of Motorsports, JBL/Harmann, Maserati USA and more. While registration is a $20 tax deductible donation, entrants are encouraged to create their own fundraising pages throughout the summer – registration is ongoing and can be found at: www.drivetowardacure.org/summer.

Pollack noted that continued creative fundraising avenues for Drive Toward a Cure are scheduled through year-end, including acting as a global beneficiary to the upcoming Concours d’Elegance & Circuit later this Fall in Corfu, Greece.

Drive Toward a Cure raises funds and awareness for Parkinson’s Disease research AND patient care.  Inspired by the camaraderie found within the automotive culture, the organization’s mission benefits equally from both enthusiast communities and industry professionals.  Drive Toward a Cure events harness enthusiasm for cars and driving and turn that power into support for ongoing work to improve the lives of those living with Parkinson’s, as well as the research that will hopefully one day lead to a cure. Since 2016, Drive Toward a Cure has raised nearly one million dollars to support BOTH research AND patient care.