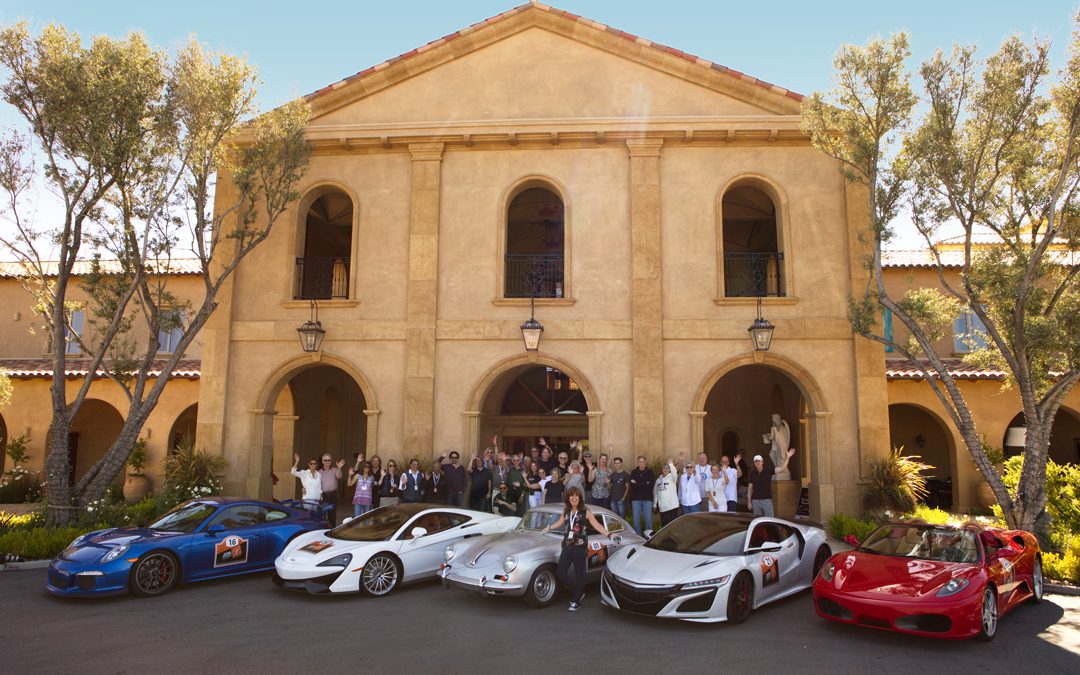 LOS ANGELES – May 4, 2017 – – Legendary gentleman racers like Phil Hill, David Love and Sam Posey are not the only individuals challenged by Parkinson’s Disease that have enjoyed a good drive. The Drive Toward a Cure ‘California Adventure’ charity rally included 36 entrant vehicles that took on nearly 600 miles of scenic California roads over three days and two nights, culminating in Paso Robles, Calif. The recent event, held April 28-30th, attracted car enthusiasts of all types, each wanting to support a worthy cause — many whom have had Parkinson’s affect their family and friends, and even some who are living with Parkinson’s themselves.

The inaugural effort, an alternative to ‘for profit’ driving programs, began as an opportunity to grow interest in the Parkinson’s cause among automotive aficionados and potential automotive sponsors, and grew into a full 3-day event that raised approximately $25,000 to benefit both the globally renowned Michael J. Fox Foundation and the California-based Parkinson’s Institute and Clinical Center.

According to Deb Pollack, founder of the non-profit organization, the ability to team cars and camaraderie for such a good cause was the underlying benefit – but the weekend itself earned the respect of competitive drivers known to participate in nationally recognized rallies, while fulfilling a vision to open a new channel for a charitable gathering.

“We are looking to build both an adventure and a movement within the automotive community that will create a groundswell in finding a cure for Parkinson’s Disease,” said Pollack. “Having been in the car industry for several decades – blending cars and camaraderie has always been something of second nature – but when I lost my Mom to Parkinson’s in 2006, I realized there were meaningful ways to share friendships and the emotional bonds and gratification that driving can bring, to support the challenges others may face.”

With two simultaneous, spirited drives along portions of the most scenic and challenging roads in both northern and southern California, the premiere Drive Toward a Cure rally focused on a weekend of exhilarating drives, luxury accommodations and exceptional wine and food centered around the Paso Robles area. Saturday evening’s dinner reception for 80 guests at the Adelaida Vineyards and Winery was but one example that combined an opportunity to socialize while sharing a charitable message – the evening’s raffle and minimal silent auction alone reaped more than $5,000 for the charitable goal – with short but engaging dialogues by Dr. Carrolee Barlow, CEO of the Parkinson’s Institute, and Derek Torry, an early on-set Parkinson’s patient and rally entrant.

Offering local support for the cause was Paso Robles Mayor, Steve Martin, who joined the entire group for lunch in the Paso Robles town square restaurant, Bistro Laurent, where he presented a proclamation from the city declaring April 29th “Drive Toward a Cure Day” in Paso Robles.

Throughout the weekend, entrants were wined and dined by local establishments including their temporary home-away-from-home in the Tuscan-inspired Allegretto Vineyard Resort, and during the initial Friday morning drive to Paso Robles, Northern and Southern route entrants gained unparalleled viewing access to some of the world’s most prized car collections, including the ultra-private John Mozart Collection and the famed Mullin Museum.

Awards distributed through the course of the event included:

As this newest rally emerges within the automotive field, all levels of car enthusiasts are encouraged to participate in future programs, including the upcoming ‘Great Southern Adventure’ this Fall, which will include drives through the Blue Ridge Mountains, the famed ‘Tail of the Dragon’ and lead into the Atlanta Concours. Those seeking more information can visit www.drivetowardacure.org.

The Drive Toward a Cure program pursues an alternative to the numerous ‘for profit’ rally driving programs through the creation of events that team cars and camaraderie to raise funds in support of the challenges of Parkinson’s Disease, benefiting research and patient care. The premiere California Adventure event has been carefully designed to provide a premium experience while raising much-needed funds to continue the search for a cure. Our beneficiaries are The Michael J. Fox Foundation and The Parkinson’s Institute and Clinical Center. For donations, sponsorship and event registration, please visit www.drivetowardacure.org.