Catch This 2017 Acura NSX report from the California Adventure 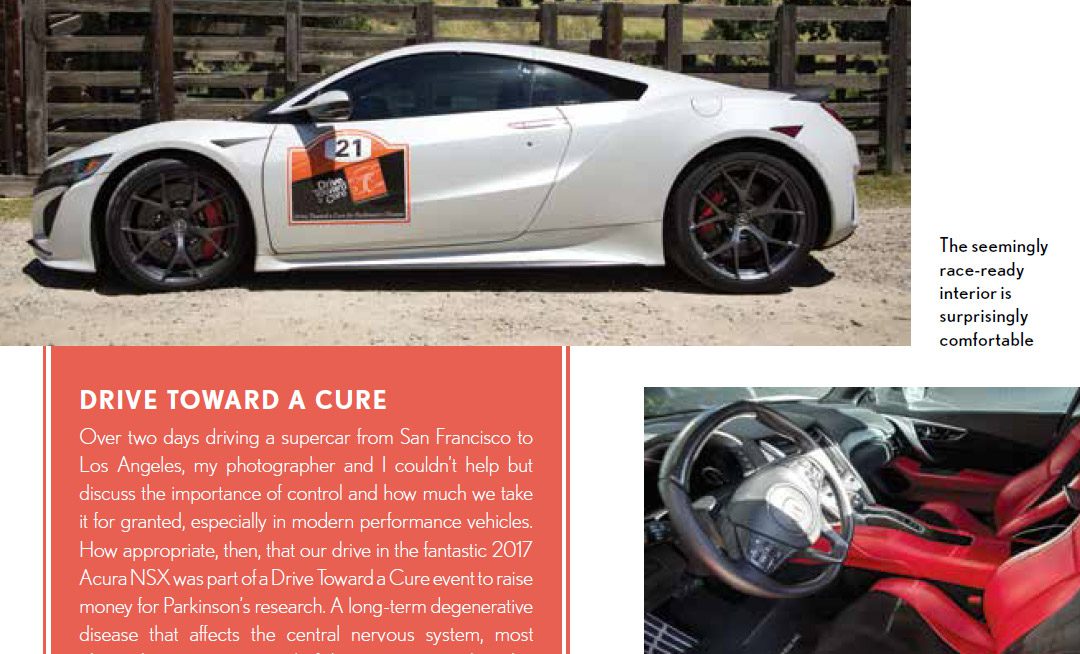 The first-ever Drive Toward a Cure “California Adventure” was the backdrop for Kingdom Magazine’s story about driving the all-new 2017 Acura NSX. As with our other participants, Reade Tilley was struck by the importance of the underlying cause – raising funds for Parkinson’s Disease research and patient cure, benefiting The Parkinson’s Institute and Clinical Center, and The Michael J. Fox Foundation for Parkinson’s Research.

About the Drive Toward a Cure program, Reade writes:

Over two days driving a supercar from San Francisco to Los Angeles, my photographer and I couldn’t help but discuss the importance of control and how much we take it for granted, especially in modern performance vehicles. How appropriate, then, that our drive in the fantastic 2017 Acura NSX was part of a Drive Toward a Cure event to raise money for Parkinson’s research. A long-term degenerative disease that affects the central nervous system, most obviously impacting control of the motor system but also causing other issues, Parkinson’s is misunderstood by many, and misconceptions about the disease mean that it doesn’t get the same amount of attention as some others, despite it affecting more than 6 million globally and being responsible for more than 100,000 deaths each year. Chief among the misconceptions is that it only affects the elderly. Actor Michael J Fox was 29 years old when he was diagnosed, and the Drive Toward a Cure event benefitted both his foundation and the Parkinson’s Institute and Clinical Center, which is leading the fight against the disease. To learn how you can participate in a Drive Toward a Cure event—enjoying great driving and camaraderie for a great cause—or to learn more about what you can do in the fight against Parkinson’s, visit drivetowardacure.org

Naturally, Reade was impressed with the new NSX too, saying “Worthy of bearing the NSX name, the new car embodies the adventurous spirit of the original.”  In the end he declared, “For those who want to drive on the cutting edge, this is it.”