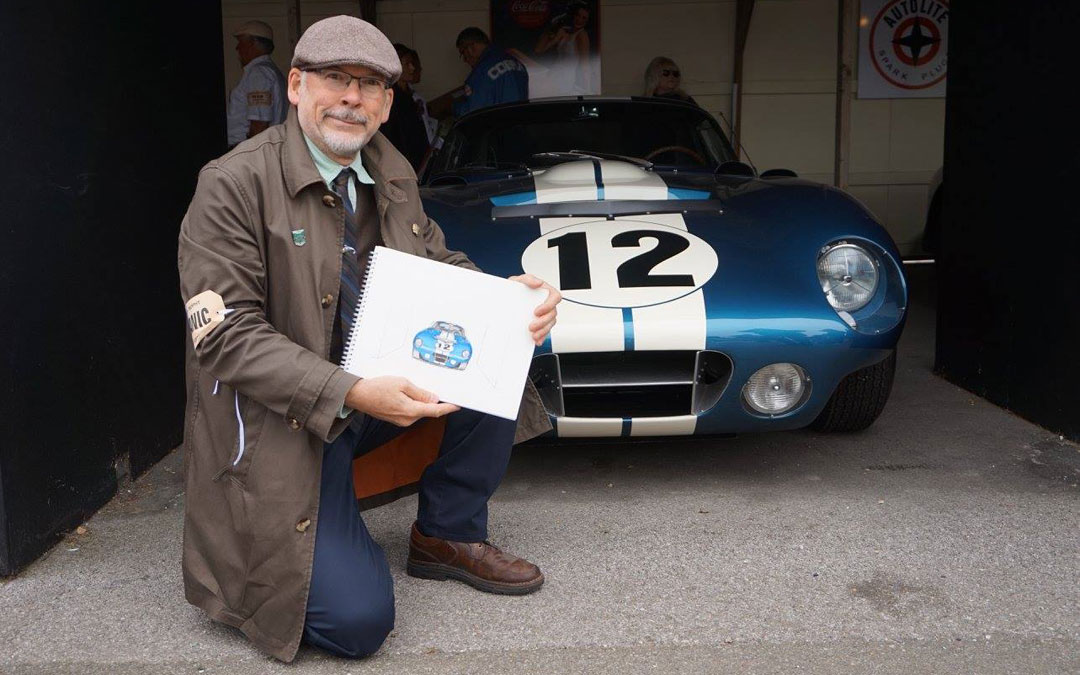 GREENWICH, Conn., May 31, 2019 – The cars won’t be the only stars at this weekend’s 24th Greenwich Concours d’Elegance, May 31st – June 2nd, 2019 located at Roger Sherman Baldwin Park in Greenwich, Conn. Famed automobile artist and illustrator Paul Chenard, long-time advocate for Parkinson’s Disease and artistic partner of non-profit Drive Toward a Cure, will be the show’s guest artist and will once again be live-sketching the highest level cars on display. The Halifax, Nova Scotia-native has been a welcome addition to the premiere event for the past several years, and for 2019 will additionally be displaying his finest artwork at a private reception Friday evening at the Malcolm Pray Achievement Center in Bedford, NY, before a crowd of several hundred guests.

According to Deb Pollack, founder of Drive Toward a Cure, Chenard has a professional background as a graphic designer for more than 30 years, however his true passion is for the history of automobile racing. “We actually first became acquainted because of mutual friendships with gentleman driver and America’s first Formula One champ, Phil Hill,” said Pollack. The alignment with each other    began to run deeper when Chenard committed to donating an illustration he had done of Hill to raise funds for Parkinson’s Disease after Hill’s passing. It was the beginning of a decade-long friendship for Chenard and Pollack that has also continued to support the Parkinson’s cause.

Most recently, Chenard has teamed with Pollack’s organization Drive Toward a Cure, which benefits Parkinson’s disease research and patient care. Chenard is offering numerous selections of his original artwork for sale on the Drive Toward a Cure website at www.drivetowardacure.org/automobiliart/ with 35% of sales benefitting Drive Toward a Cure‘s mission of supporting the challenging disease.

Each year during Drive Toward a Cure’s signature multi-day rally, Chenard has donated a significant and unique piece of art which has been framed and provided for the event’s “Spirit of Drive Toward a Cure Award” – the highlight of the annual event and awarded to the individual that has been a true inspiration to the charity during the time leading up to the event. As the award is chosen by the organization in advance, Chenard often depicts the winner’s vehicle, or a significant car/moment in automotive history. Past recipient vehicles have included a 1960 Porsche 356 Super 90; an Amelia Island Concours class-winning 1969 Iso Grifo; and a 1966 Chaparral 2D – the winning racecar driven by Phil Hill at 1000 km Nürburgring in 1966.

This year’s ‘Spirit of Drive Toward a Cure‘ award winner was Sean Kiernan, custodian of the original Bullitt Mustang from the famed Steve McQueen thriller film, whose father Robert J. Kiernan, Jr., was the owner since 1974 and succumbed to Parkinson’s in 2014. Over the past year, Kiernan has toured the famous movie star car nationwide, as well as in the UK for a significant showing on track at the 2018 Goodwood Festival of Speed. Kiernan furthered his alignment with the non-profit by displaying Bullitt at the Grand National Roadster Show where Drive Toward a Cure was ‘charity of choice’ for 2019, and together, Kiernan and Pollack announced the ‘Bullitt50 Chronograph’ raffle winner that was part of 5-month joint fundraiser for Parkinson’s.

Chenard once again stepped up to support the cause for Drive Toward A Cure’s 2019 rally, with his personal donation of a ‘graphic novel’-style illustration of the original Bullitt car, entitled “Objects in the mirror are…” depicting the most famous car chase scene in cinematic history from 50 years ago. The award was given to Kiernan at the event’s final reception in Yosemite before more than 50 attendees, including his mother, Robbie Kiernan.

Drive Toward a Cure raises funds and awareness for Parkinson’s Disease research and patient care. Inspired by the camaraderie found within the automotive culture – the organization’s mission applies equally to both enthusiast communities and industry professionals. Drive Toward a Cure events harness enthusiasm for cars and driving and turn that power to support ongoing work to improve the lives of those living with Parkinson’s, as well as the research that will hopefully one day lead to a cure. Drive Toward a Cure is a 501(c)(3) non-profit supporting beneficiaries including The Michael J. Fox Foundation and The Parkinson’s Institute and Clinical Center. For donations, sponsorship and event registration, please visit www.drivetowardacure.org

Since its inception, Drive Toward a Cure has raised more than $250,000 including contributions to both the Michael J. Fox Foundation and the Parkinson’s Institute and Clinical Center – providing financial assistance for both research and patient programs. Pollack, who’s mantra for the organization is to blend cars and camaraderie, is expanding her organization’s efforts to include localized programs within nationally recognized driving clubs and driving schools. During the past year, grassroots programs collectively raised enough funds to foster a ‘California Wildfire Grant Fund’ supporting California residents with Parkinson’s that had been affected by the recent devastating fires in late 2018. Applicants received funds in late January 2019.