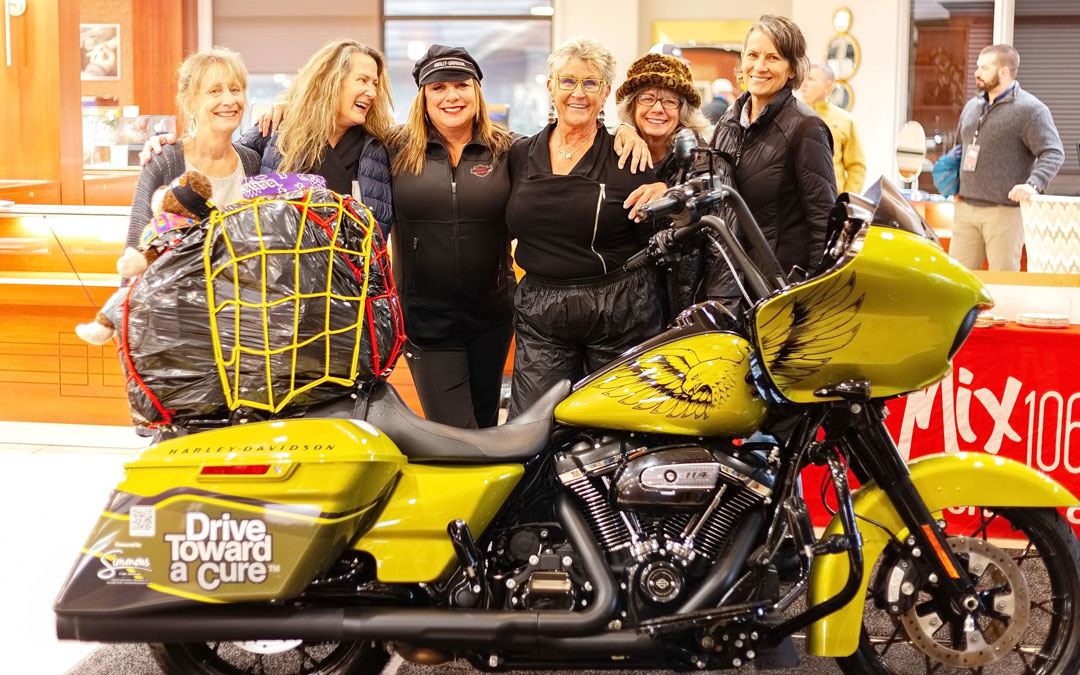 BOISE, Idaho – May 10, 2022 – When Idaho resident and avid Harley-Davidson rider, Joni Pursell, decided to pursue her personal mantra of ‘YRUW8NG’ (Why Are You Waiting), it was not only a given that the 63-year-old mother/grandmother and financial advisor was about to take on the adventure of her life, but she insisted there would be charitable involvement along the way.  Her 34-day, 8,000-mile journey began atop her 2020 Harley-Davidson Road Glide bike on Monday morning (May 9th) in Meridian, Idaho and will be benefiting Parkinson’s Disease through national non-profit foundation Drive Toward a Cure™ with a portion of the proceeds supporting St. Luke’s Parkinson’s Disease and Movement Disorders Center in Boise.  www.drivetowardacure.org/fundraising/joni. 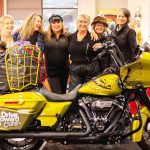 63-year-old Joni Pursell is a mother/grandmother/financial advisor and avid Harley Davidson owner/rider (third from right) sharing a moment with her rider friends in Idaho, before taking off on her 34-day, 8,000-mile motorcycle ride throughout North America, raising funds and awareness for Parkinson’s Disease through Drive Toward a Cure. 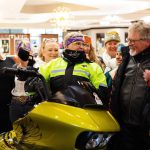 Friends that ride together, thrive together – Idaho residents Joni Pursell (center) and family friend Mike Burke (right) have ridden Harley Davidson motorcycles together since 2002 – and will now embark on a 34-day/8,000-mile charity ride benefitting Parkinson’s Disease through non-profit Drive Toward a Cure. 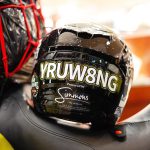 ‘YRUW8NG’ is the mantra of 63-year-old Joni Pursell – as she heads off on a 34-day/8,000-mile charity motorcycle ride across North America – raising funds and awareness for Parkinson’s Disease through non-profit Drive Toward a Cure™ (https://www.drivetowardacure.org/fundraising/joni) – sponsored by Boise, Idaho’s Simmons Fine Jewelry, Idaho Watch Collective, High Desert Harley Davidson and Next Level Financial Planning. 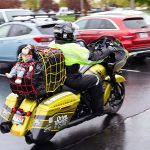 Idaho resident Joni Pursell, and her mascot AXE, are heading on the ride of their lives – a 34-day/8,000-mile charity motorcycle ride crossing 18 states, 2 Canadian provinces and Lake Superior – all to support Parkinson’s Disease through non-profit Drive Toward a Cure.

Pursell is currently riding on the fifth Harley-Davidson motorcycle she’s owned and is proud to share that she’s ridden more than 130,000 miles to date.  Yesterday’s send-off was a morning gathering at sponsor Simmon’s Fine Jewelry in Meridian, where friends, colleagues and fellow motorcyclists gathered despite the inclement weather which surprised them all – a combination of rain and snow coupled with wind in May, no less.  But no weather was about to stop all that she had planned.

“No matter how cold or hard this is going to be, we’ll be doing nothing compared to people struggling with Parkinson’s…we got this!” said Pursell.

As a successful financial advisor for the past 38 years and on this ride representing her firm Next Level Financial Planning, Pursell is no stranger to planning and perseverance.  While her plan for this road trek will have her traveling through 18 states, 2 Canadian Provinces and crossing over Lake Superior before heading back home to Boise, she’s prepared to cope with any challenges along the way.  With her husband Clyde Dornier trailing in an Acura MDX as a support vehicle, she’ll be crossing some of the most glorious roads in North America and has another partner along for the ride – family friend, 73-year-old Mike Burke on his Harley ‘fat boy’ bike –Mike and Joni have been riding together since 2002.

Why Drive Toward a Cure

When Blake Simmons, store manager of family-owned Simmons Fine Jewelry in Meridian, first learned of his friend Joni Pursell’s quest to ride for a cause, he immediately volunteered to become a lead sponsor, and was a conduit in connecting her directly to another friend — Drive Toward a Cure’s founder Deb Pollack.

Simmons and Pollack have bonded over more than their joint automotive enthusiasm and shared events — each has lost a close relative to the challenges of Parkinson’s.  For Simmons it was his grandfather, and for Pollack her mother – the inspiration for the founding of the non-profit which has carved a name for itself within the automotive community at large.

Since 2016, Drive Toward a Cure has been on a mission to support Parkinson’s Disease research AND patient care, with donations primarily benefiting the Michael J. Fox Foundation and the Parkinson’s Foundation. Most recently, Drive Toward a Cure created its own ‘Access to Care’ fund that supports Parkinson Foundation Centers of Excellence throughout the country, in areas including Atlanta, Phoenix, Boston, Denver, Houston, Nashville, New York City, Portland and San Diego. Additionally, the foundation benefits grassroots and regionally located Parkinson’s clinics and facilities in the areas it hosts events.

Having raised more than $960,000 since its beginnings in 2016, Drive Toward a Cure has also created the #BeOneInAMillion campaign for 2022, helping the foundation to cross the $1,000,000 threshold.  Pursell’s ‘ride’ has already played an important role in that.  For more info or to donate visit www.drivetowardacure.org/fundraising/joni.

Having overcome two major back surgeries and one hip replacement, Joni Pursell is not one to let her bike or her body sit idle – she has enjoyed motorcycle events and rides since 2002.  This adventure offers a chance to engage a broad audience to ride along with her in several ways:

To become a local area sponsor or host a gathering during the 34-day event, contact info@drivetowardacure.org.

Drive Toward a Cure raises funds and awareness for Parkinson’s Disease research AND patient care.  Inspired by the camaraderie found within the automotive culture, the organization’s mission benefits equally from both enthusiast communities and industry professionals.  Drive Toward a Cure events harness enthusiasm for cars and driving and turn that power into support for ongoing work to improve the lives of those living with Parkinson’s, as well as the research that will hopefully one day lead to a cure. Since 2016, Drive Toward a Cure has raised nearly one million dollars to support BOTH research AND patient care.