$30k Raised Thanks To No-Reserve Bring A Trailer Charity Auction 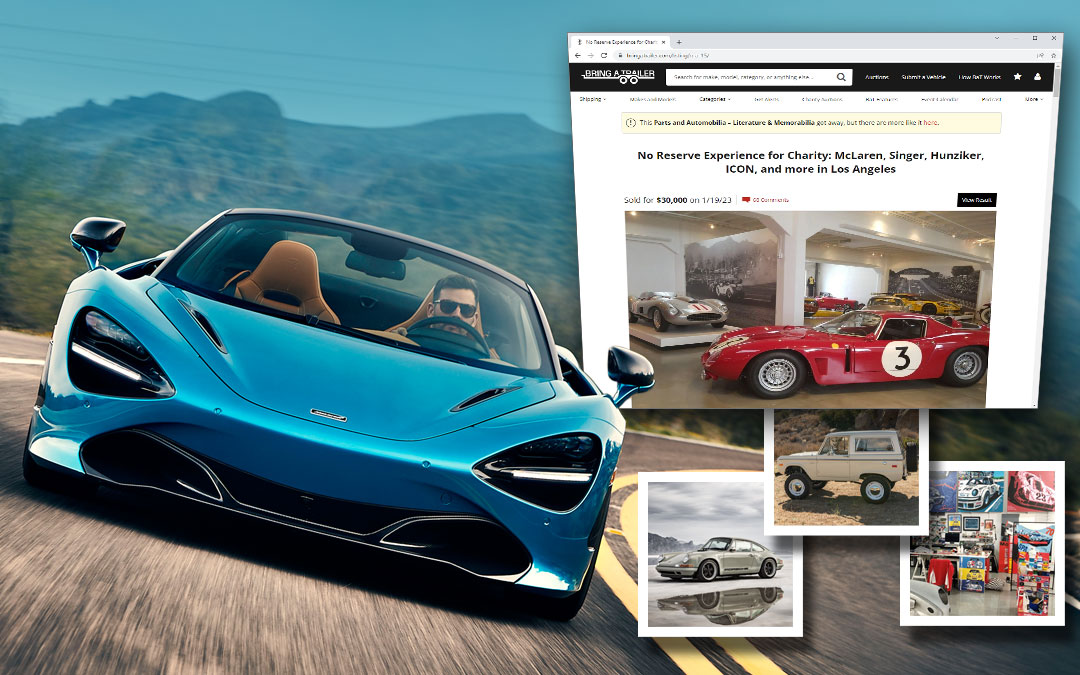 LOS ANGELES – January 23, 2023 – The automotive enthusiast community showed up in full force through Bring a Trailer’s auction platform supporting non-profit foundation Drive Toward a Cure’s initiative to broaden awareness for Parkinson’s Disease and grow its ‘Special Assistance Fund.  The Fund, which began in 2019, provides grants for those patients challenged by exceptional and unexpected needs. The seven-day, no-reserve charity auction featured ONE near-priceless package that included private tours of four renowned Los Angeles-based automotive-related facilities, along with a 3-day behind-the-wheel experience in a McLaren 720S Spider.  The winning bid reached $30,000 and its winner will gain behind-the-scenes private access to each of the contributing facilities, home to some of the most generous and admired enthusiasts within the car industry. 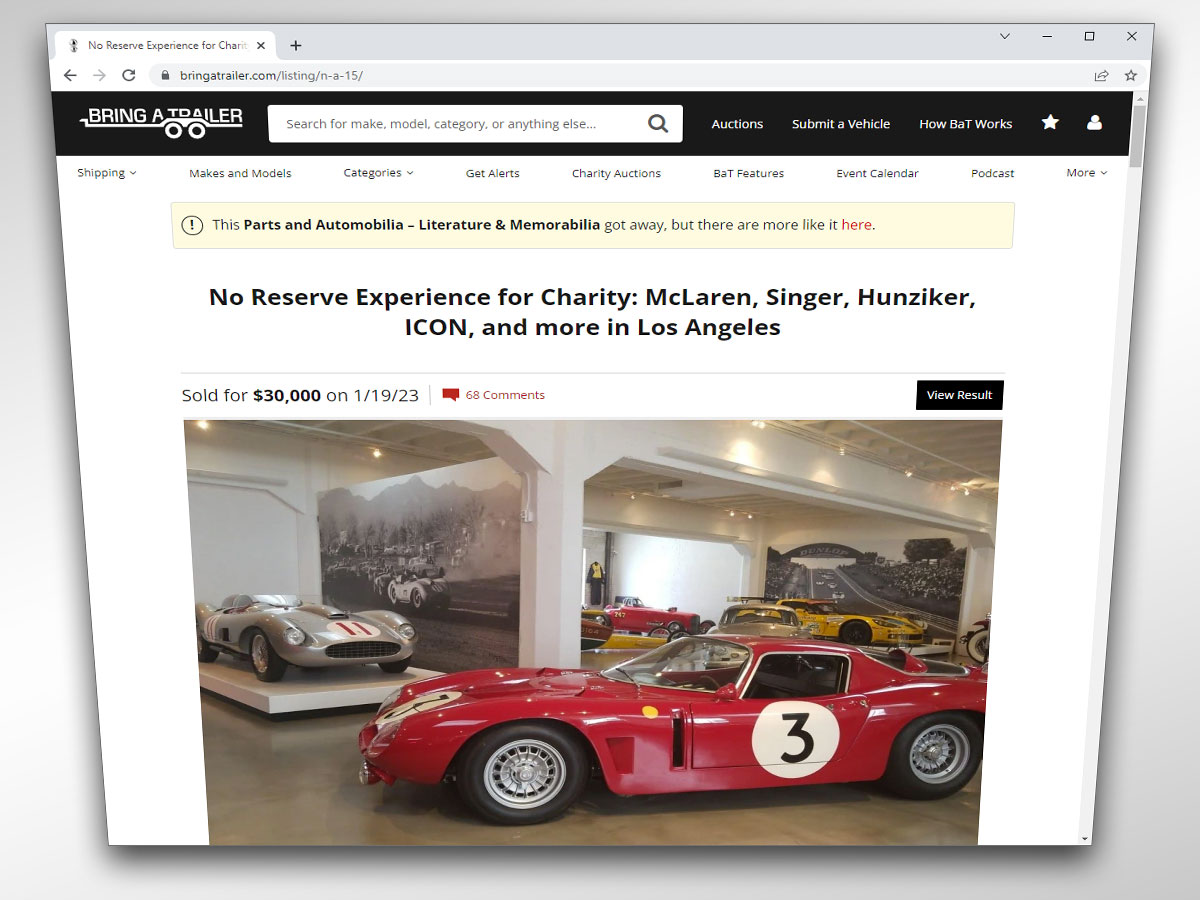 Non-profit foundation Drive Toward a Cure® raised $30,000 for its ‘Special Assistance Fund’ through Bring a Trailer’s ‘no-reserve’ charity auction package which included four private tours of esteemed Los Angeles-based automotive-related facilities and a 3-day driving experience in a McLaren 720S Spider. To support the grant fund, or for Parkinson’s patients to apply, view: www.drivetowardacure.org/special-assistance-fund/ . 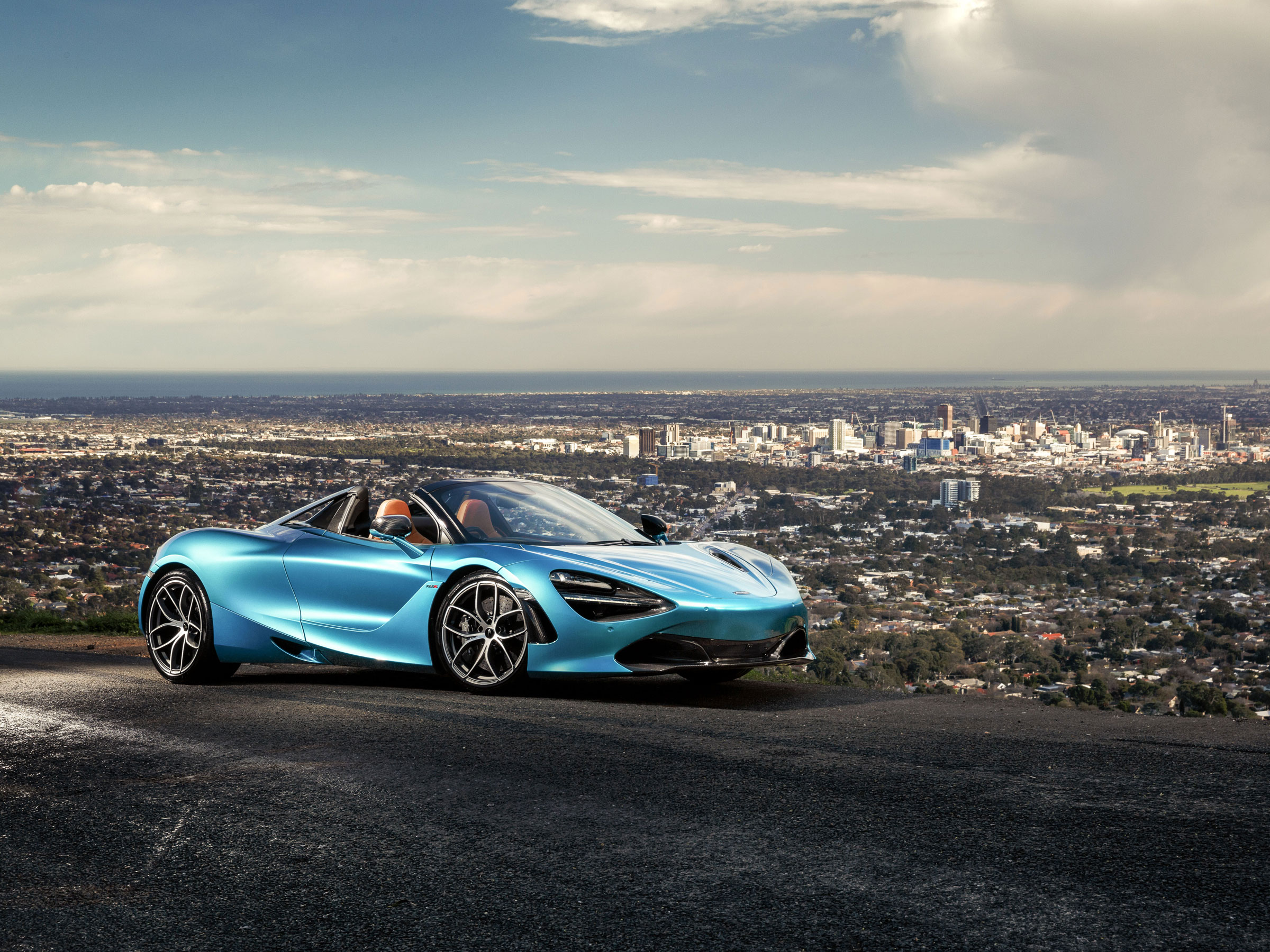 The winning bidder of the recent Drive Toward a Cure® charity auction on Bring a Trailer, not only generously donated $30,000 to gain private access to behind-the-scenes tours at ICON, Singer, Hunziker’s Automotive Fine Art Studio and Bruce Meyers Garage, but will be driving a McLaren 720S Spider for 3 days in Los Angeles as part of the complete package – all dollars raised support Parkinson’s Disease through Drive Toward a Cure’s ‘Special Assistance Fund’.

Jonathan Ward, of famed ICON 4×4, generously donated a tour of his facility to be included in the special no-reserve charity auction package for non-profit Drive Toward a Cure® which raised $30,000 for its ‘Special Assistance Fund’ through Bring a Trailer’s platform and supporting Parkinson’s Disease. ICON is one of four contributing LA-based automotive stops, each of which are home to some of the most generous and admired enthusiasts within the car industry. 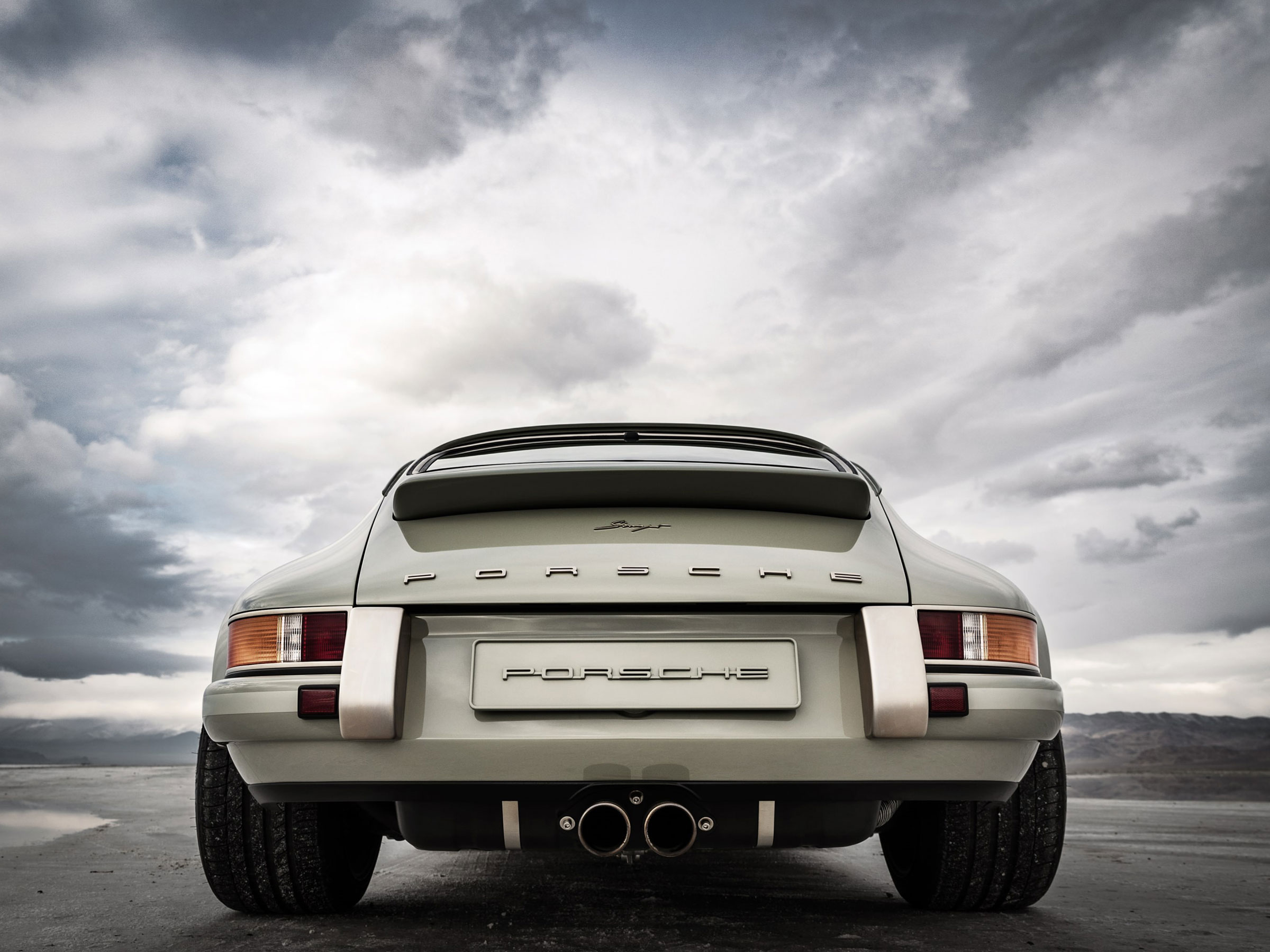 Singer’s ‘Sun Valley Commission’ was a late addition to the auction prize, when a generous Singer owner offered to include a ‘ride along’ in his own bespoke car to coincide with the upcoming tour of Singer’s new facility in Torrance, Calif. Singer is one of four prominent automotive houses that have contributed to the charity auction prize package – others include ICON, Hunziker Automotive Fine Art Studio and Bruce Meyer’s Garage. 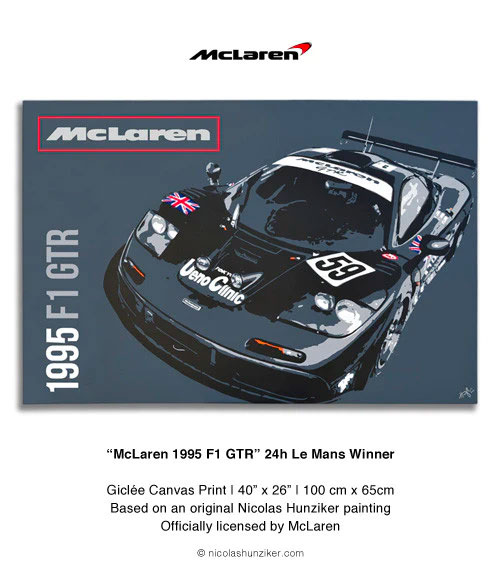 This 40”x26” giclee on canvas is a reproduction of Nicolas Hunziker’s original painting of the LeMans-winning 1995 McLaren F1 GTR, and was donated by Hunziker Automotive Fine Arts, along with a pair of McQueen-branded Casual Driving Shoes by Hunziker, as part of the recent Drive Toward a Cure® charity auction on Bring a Trailer. Hunziker’s studio will be one of four prominent private tours given to the auction winner – who’s final bid of $30,000 will contribute directly to the Drive Toward a Cure ‘Special Assistance Fund’ supporting Parkinson’s Disease.

Partners for this ‘no-reserve’ charity auction are providing access for up to four guests at Bruce Meyer’s private collection in Beverly Hills, ICON’s 4×4 facility, Hunziker Automotive Fine Art Studio and Singer Vehicle Design’s new US headquarters in Torrance, Calif., now housing all seven of its workshops under one roof.  None of the four facilities being toured are available for public ‘walk-ins’, and visits are generally difficult or impossible to arrange.

Bruce Meyer, easily regarded worldwide as the ‘nicest guy in the car hobby’, stepped-in during the live auction by offering to personally conduct the tour of his own garage and share his personal perspective behind the provenance of the significant cars in his collection.  He also offered to coordinate an additional tour of the Petersen Museum, where he is the Founding Chairman, and include its famed ‘Vault’ featuring more than 250 vehicles from around the world.

Additionally, one generous Singer owner raised the ante for the entire package during the final hour of the auction, donating a ‘ride-along’ within his own bespoke Singer commission, to coincide on the day of the Singer tour.

Other items noted in the original package for the winner to receive include a 40×26” giclee print that reproduces Hunziker’s painting of the Le Mans-winning 1995 McLaren F1 GTR as well as a pair of McQueen-branded Casual Driving Shoes by Hunziker; and a bundle of three separate Singer items: an autographed limited-edition Singer book, an unopened ‘sold out’ Issue #10 of 000 Magazine featuring Singer’s Mulholland Commission, and a one-of-one giclee print of the Mulholland Commission signed by photographer Larry Chen.

Drive Toward a Cure’s founder Deb Pollack, who curated the auction package, spoke of her full heart following the exciting auction conclusion which included a total of 21 bids, more than 19,000 views and nearly 700 watchers on Bring a Trailer.  “It was inspiring and emotional to watch an automotive community come together for our small and growing organization in a very BIG WAY,” said Pollack.  “Not only was a substantial amount of money raised for our grant funding to benefit those challenged by Parkinson’s Disease, but the comments from many non-bidders posted during the auction duration proved just how worthy our cause remains and that the awareness within the automotive and public arena is both needed and meaningful.”

This past year, thanks to donors, volunteers and individuals helping to spread awareness for the cause, Drive Toward a Cure surpassed $1 million raised since its beginning in 2016, and the automotive community supported every effort.  The foundation’s ‘Special Assistance Fund’ was created by Drive Toward a Cure to offer financial assistance to Parkinson’s patients that need extra support following natural disasters including fires, tornadoes, hurricanes, and earthquakes, as well as individual extenuating circumstances.  During the pandemic alone, Drive Toward a Cure supported Parkinson’s applicants following the Louisiana hurricane, Kentucky tornado, and specific patient care needs.

About Bring a Trailer

Bring a Trailer (BaT) is a digital auction platform and enthusiast community that was founded in 2007 to connect buyers and sellers of classic, collector and enthusiast vehicles. BaT curates vehicles submitted by sellers and helps them craft transparent auction listings that present the vehicles as they are—without superlatives or dubious used-car-lot language. Each listing is vetted by BaT’s knowledgeable community of more than 930,000 registered users so potential buyers can bid with confidence.